On Display from October 20-November 30 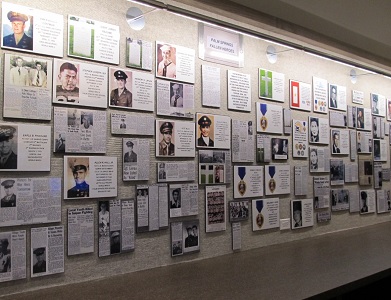 Beginning on Tuesday, October 30th and continuing through the end of November, the Welwood Murray Memorial Library will remember those local residents who were lost in war and military actions by displaying the Fallen Heroes display in the main room of the Welwood Murray Memorial Library. Their work can be viewed during the Library’s hours of operation.

The display will be installed by the creator Lee Wilson Jr. on Tuesday afternoon October 20th. A total of 27 local residents of Palm Springs, Cathedral City, and Desert Hot Springs have given their lives and were killed in action in WWII, Korea, Vietnam, Iraq, and Afghanistan. Of the 16 killed in WWII, seven were Palm Springs High School graduates.  Of the eight killed in Vietnam, seven came from the classes of 1965, ‘66, and ‘67.

This display was created by Lee Wilson Jr., a Cathedral City High School World/U.S. History Teacher and Veteran. At the time the project began he was serving as the historian for the Palm Springs American Legion. Having two students that lost their lives, Ming Sun/KIA 2007 Iraq, and Suresh N.A. Krause/KIA 2012 Afghanistan, he wanted to know exactly how many others from the Palm Springs area had been killed in action.  Since nobody knew, nor were there any records, he took it upon himself to collect information and learn as much as he could about our local KIA/MIA.

Last year he was given the opportunity to display the Fallen Heroes display at the Palm Springs Air Museum. This year he will be showcasing the display downtown at the Welwood Murray Memorial Library in coordination with the newly created banners that will grace Palm Canyon Drive—one for each of the 27 Fallen Heroes for Veterans Day.

Click on the image below to watch a KMIR (NBC) News Report on the Fallen Heroes display at the Welwood Murray Memorial Library: 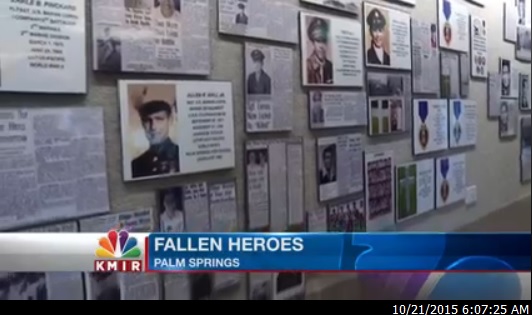