Adult Summer Reading Film Screening: "Side by Side"

It's Showtime at Your Library: 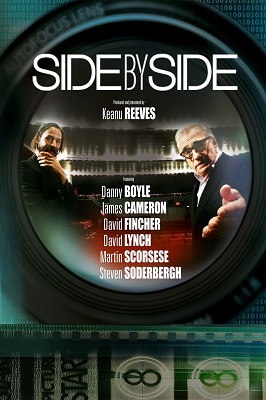 Join us on Wednesday, June 12 for a film screening of Side by Side. This documentary film is an in-depth examination of how digital filmmaking is challenging traditional celluloid film as the gold standard in moviemaking. The program will be from 2:00-4:00 p.m. in The Learning Center (TLC).

Side by Side captures the essence of the film versus digital debate through unprecedented access to influential filmmakers such as James Cameron, David Fincher, George Lucas, David Lynch, Martin Scorsese, Robert Rodriguez, Lana and Lilly Wachowski, Steven Soderbergh and many more.

For almost one hundred years there was only one way to make a movie. Movies where shot, edited and projected using photochemical film. But over the last two decades a digital process has emerged to challenge photochemical filmmaking. Side by Side investigates the history, process and workflow of both digital and photochemical film creation, and how—at least for now—the two forms coexist side by side.

Through interviews with directors, cinematographers, film students, producers, technologists, editors, and exhibitors, Side by Side examines all aspects of filmmaking—from capture to edit, visual effects to color correction and distribution to archive. The film examines what is gained and what is lost both practically and philosophically in the changeover from film to digital through anecdotes and candid opinions about how the digital revolution is transforming their storytelling tools, techniques and democratizing the filmmaking process.

At this moment when digital and photochemical filmmaking coexists, Side by Side explores what has been gained, what is lost, and what the future might bring.