The meeting begins at 10:30 a.m. at the Mizell Senior Center at 480 S. Sunrise Way in Palm Springs. This month’s book is The Baby Thief by Barbara Bisantz Raymond. Check the website for all book selections. 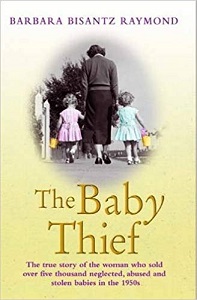 Drawing on extensive interviews and correspondence with many of Tann's surviving victims, Barbara Raymond shows how Tann not only popularized adoption—which until then had been feared and discouraged —but also commercialized and corrupted it. She tells how Tann abducted babies or coerced women to leave their children in her care and then sold them. To cover her kidnapping crimes she falsified birth certificates, a practice that was approved by legislators who believed it would spare adoptees the taint of illegitimacy—and one that still holds today in the form of 'amended' birth certificates and closed adoption records.

Uncovering many life-shattering stories along the way, Raymond recounts how Tann openly sold more that 5,000 children, and killed so many through neglect that Memphis's infant mortality rate soared to the highest in the country. She explores how Tann's operation was able to thrive in a Tennessee governed by 'Boss' Ed Crump and the political network that allowed her to operate with impunity. And she portrays the lack of options available to women, affecting not only the birth mothers she robbed, but also Tann herself, who turned to social work after having been barred for what was then considered a masculine profession—the law. Written by an adoptive mother, The Baby Thief is part social history, part detective story, and part expose. It is a riveting investigative narrative that explores themes that continue to reverberate in the modern era, when baby sellers operate overseas.