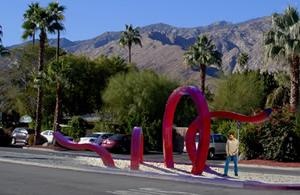 The WSNO initiated a request to the Palm Springs Public Arts Commission for a sculpture installation to be placed on the median strip at Warm Sands Dr. and Ramon Road. The median, which measures 15' x 150,' has been neglected over the years and has long been in need of beautification. Currently it is barren, except for a layer of gray rock.

The initial WSNO presentation to the Arts Commission was made in June, 2006 and after exploring various options and considering several artists, in January 2007 the Commission voted to acquire and install a beautiful, site-specific, large-scale sculpture by local artist, Delos Van Earle.

Known as Jungle Red, this monumental work of public art will feature large red steel beams that appear to weave in and out of the ground in way that is both fanciful and dramatic. Lighting and landscaping to complement the sculpture is now being planned and a final design should materialize in the coming months. The artist hopes to begin installing the sculpture during the Fall/Winter season with expected completion in 2008.

After months and months of work on this project, the City Council approved the funding for the sculpture on June 27, 2007. To date, this is the largest and most impressive piece of public art in Palm Springs, and it will be an important addition to the Warm Sands Neighborhood.