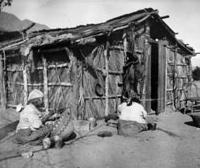 For thousands of years, the Coachella Valley was home to the Agua Caliente Band of Cahuilla Indians. During the winter months, they established their village around the natural hot mineral springs (current site of the Spa Resort Casino). In summer, to escape the extreme temperatures of the desert floor, the small band moved to the canyons where it was more comfortable because of the higher elevation. Few had ever seen a white man.

In 1877, the Southern Pacific Railroad completed its line through the desert to the Pacific Ocean. A Congressional policy established that every odd section of land for 10 miles on either side of the track became the property of the railroad (a section was defined as one square mile). The even-numbered sections remained the property of the federal government. 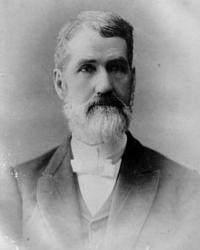 In 1884, Judge John Guthrie McCallum of San Francisco and his family became the first non-Indians to settle here. McCallum, with the assistance of local Indians, built a 19 mile stone-lined ditch from the Whitewater River into Palm Springs bringing in pure, precious water for irrigation.

Throughout the 19th century, various explorers, colonizers, and soldiers came through the desert, but it was not until 1853 that the United States Topographical Engineers mentioned the oasis of palm trees and springs which they called "Palm Springs." The name did not stick at that time, however. After California became a state in 1850, various stage routes crossed the desert, and "Big Bill Bradshaw's" freight line began to stop at what Bradshaw called "Agua Caliente." The place was known by that name or variations of "Palm Valley" until 1890 when Harry McCallum referred in a letter to his post office address in "Palm Springs." 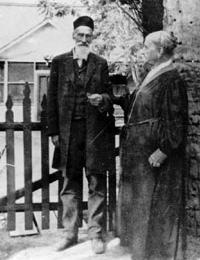 Dr. Wellwood Murray, of nearby Banning, opened Palm Springs' first hotel, called the Palm Springs Hotel, which was conveniently located directly across the road from the Indian bathhouse where his guests could take advantage of its warm, curative waters.

In 1909, Dr. Harry and Nellie Coffman started their sanitorium, The Desert Inn, which was originally a place for those afflicted with tuberculosis. The Inn later became a world-renowned resort hotel catering to the very wealthy, which included captains of industry and well-known millionaires such as the Vanderbilt and Hearst families.

World War II brought rapid growth to Palm Springs with many new housing developments and businesses. The Desert Museum opened its doors in 1938, a public library was established in 1939 and the Desert Hospital opened in 1951.

Other famed guests were FBI Director J. Edgar Hoover and Mayor Jimmy Walker of New York, along with many other notables and celebrities. Even little Shirley Temple learned to ride her two-wheeler on the grounds of the Desert Inn. Palm Springs was now on its way to becoming a thriving resort.

Palm Springs was incorporated in 1938 with Philip Boyd as the first Mayor. World War II brought rapid growth to Palm Springs with many new housing developments and businesses.

In the 1950s, about 3,000 sections of land were transferred to the Agua Caliente Band of Cahuilla Indians. This created a checkerboard pattern of growth, still evident in the area today. The Agua Caliente also hold title to the fan palm oases of Palm, Murray and Andreas Canyons.

Hollywood discovered Palm Springs as early as about 1919. The desert was considered a choice filming spot for many silents, and stars such as Rudolph Valentino, Ernest Torrence, and Theda Bara could be easily spotted in town. Since then, Palm Springs has become known as "The Playground of the Stars." Many have had homes in the City or have stayed at famous places such as the El Mirador Hotel and Charles Farrell's Racquet Club. Spotting a movie star walking down the street, shopping or in a restaurant was a common occurrence.El Mirador Hotel circa 1930 Pictures courtesy of the Palm Springs Historical Society. To learn more about the history of Palm Springs, please visit the Palm Springs Historical Society at 221 S. Palm Canyon Drive. Call for the museum's hours of operation.