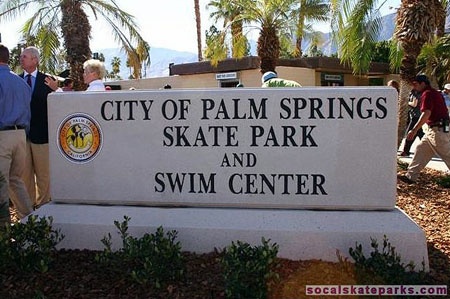 The City of Palm Springs opened its new skate park in December 2003. The park is located adjacent to the City’s swim center in Sunrise Plaza at 401 South Pavilion Way. The formal dedication ceremony was conducted on January 17, 2004 by the Honorable Ron Oden, Mayor of Palm Springs. By the time the park was dedicated, it was already considered by many to be one of best, if not “the best,” skate parks in the State of California.

The skate park project took several years to become a reality by the City due to a considerable amount of careful planning, innovative design concepts and features the City Council demanded be part of the final product. Early on in the process, local skaters were involved with the design team to ensure that the park featured all of the elements they wanted to see in the project. Skater involvement helped the City develop a park that incorporates the type of skating surface they wanted, the features they desired and even replicas of the long forgotten pools which launched the popularity of skateboarding in the early 1970s. All of these steps led to the development of one of the finest skate parks in Southern California. It is a genuine treasure that the City of Palm Springs is proud to call the Palm Springs Skate Park. 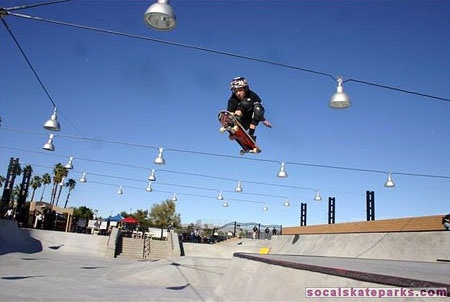 The park consists of roughly 30,000 square feet of concrete skating surface, designed to challenge the skills of both in-line skaters and skate boarders alike.

The park features a Flow Bowl with many street skating elements in and around the area such as hips, rails, pyramids, stairs, ramps and quarter-pipes, all carefully placed for maximum enjoyment. The depth of the Flow Bowl arena is an average of five feet from the surrounding surface and the largest featured section of the park . The Flow Bowl was designed to accommodate entry-level skaters as well as challenge more advanced “street skaters” looking to test themselves on elements they might encounter throughout most any public location.

Adjacent to the street skating area of the park, predominately to the center, lies the Combi-Bowl. This section is almost fully encircled with steel grind rail and divided into two distinct depths to create both a smooth and rapid transition between skating areas. The eastern entry point of the bowl is five feet, six inches in depth and flows to a secondary area that is seven feet, six inches deep overall.

The deeper section features a nine and one-half foot bowl with nearly three feet of vert-wall in the southwest corner of the bowl with the added extension ledge. The vert-wall has concrete coping and pool tile at the top edge of the extension. It is absolutely awesome to watch the skaters perform in this area of the skate park. The Combi-Bowl is described as being extremely smooth and very fast. The City considers the Combi-Bowl the area of the park designed to challenge the intermediate skater and where some of the most sensational tricks and performances by the skaters can be seen. It’s just an exciting area in which to see the skaters use and hone their amazing skills. 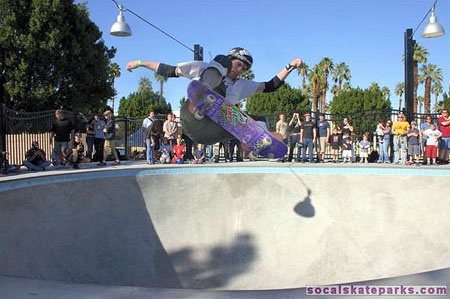 The Nude Bowl, as it is called, is unquestionably the most popular and challenging feature within the City’s skate park. The bowl is essentially a replica of a deep kidney shaped swimming pool with both a deep and shallow end, including formed stairs to east end of the shallow portion of the bowl.

Pool skating in California is at the heart of the sport of skateboarding It’s considered by many to be the summit one aspires to climb from the perspective of talent. It’s a fast style of skating and lends itself to the performance of some of the most astounding tricks and feats of balance the sport has to offer. The Nude Bowl in Palm Springs was designed specifically with this in mind and the City definitely achieved its goal in doing so.

The nude bowl is some nine feet in depth at the deep end, and four feet in depth at the shallow end and in excess of fifty feet from end to end. It has concrete pool-style coping and tile around the entire perimeter. The transition areas at the slope of the bowl are extremely smooth and a joy for the skaters to ride.

With a feature such as this in your skate park, it’s easy to see why the Palm Springs Skate Park is considered to be one of the best in the entire state. It’s smooth, it’s fast, it’s a pool skaters paradise and it’s uniquely Palm Springs.

The Palm Springs Skate Park is open every day (weather permitting) due to having one of the most innovative lighting systems in the industry. The lighting system is suspended from overhead cables instead of the traditional stadium lighting systems seen elsewhere. The design is also enhanced with the use of high-pressure sodium lights rather than the common metal-halide type. This virtually eliminates any shadows throughout the park and casts a very soothing amber glow upon the concrete at night. Many skaters prefer using the park at night due to our unique lighting system. Additionally, the area around the park is completely fenced to afford both privacy and security to the skaters. There are snacks and beverages available on site, as well as restrooms, and seating areas.

The City requires everyone to wear helmets, knee pads and elbow pads while skating and our rules are strictly enforced for everyone’s benefit.

To view pictures of our Dedication ceremony and learn what others are saying about Palm Springs Skate Park, we encourage you to visit our friends at socalskateparks.com.