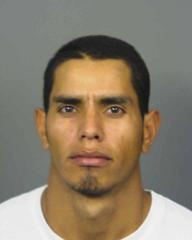 On 01/03/10 at approximately 6:26 PM, Palm Springs Police Department officers were dispatched to the 100 Block of South Saturmino Road reference a report of a woman screaming. Upon arrival, the officers saw a Hispanic male suspect running from the scene. Officers were unable to find the suspect, who was later identified by his wife as Jesus Torres Rodriguez, age 25, of Palm Springs.

Investigation revealed the Rodriguez repeatedly struck his wife in the face with the buttstock of a fully loaded shotgun while threatening to kill her.

The shotgun Rodriguez used to assault the victim was left at the scene, however, it is believed that he may have access to additional weapons. Police are seeking your help in locating Rodriguez, who may still be in the area. Rodriguez is approximately 5'8" tall, with black hair and brown eyes.

Rodriguez has been charged with attempted murder. Anyone with information regarding Rodriguez' whereabouts is urged to call the Palm Springs Police Department at (760)323-8115 or Crime Stoppers at (760)341-STOP. If seen, do not approach the subject and dial 911 immediately.